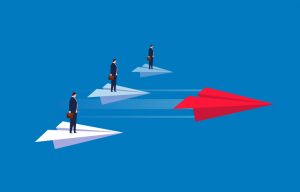 It’s not hard to find where the “stuffy” stereotype of accounting has come from: boring offices, firms inflexible with their rules, and an overall stiff work environment for so many accountants.

But that’s why I’ve been so impressed with DeLeon and Stang, a firm that takes all those stereotypes and throws them out the window, creating their own future-forward culture. I talked to Rich Stang and Brad Hoffman, partners at the firm, about what makes their office so different from other accounting firms.

One of the core components of DeLeon and Stang — one that might initially sound sacrilegious — is taking care of employees first, clients second. “If we take care of our staff first … there’s not as much turnover,” Rich said. “And so that’s ultimately going to be good for the clients as well.”

At DeLeon and Stang, the firm has made an effort to put that employees-first philosophy into practice. The team goes out to happy hour together, letting loose and having fun, even if it’s 4 p.m. on a Friday and they’re “supposed” to be on the clock.

The firm has also instituted unlimited paid time off — a policy still in the beginning stages but that lets employees know they have options for when things happen in their lives. Employees also have the option to work from home sometimes when they don’t have client meetings.

When employees feel comfortable in their work environment, they start to naturally have each other’s backs. Accounting doesn’t have to be cut-throat or boring. It can just be fun, and a work environment where people are happy to be there, like at DeLeon and Stang.

From that environment comes less of a need for staff oversight.

“They’re starting to really buy into this teamwork approach,” Brad said. “So they don’t want to let others down. So there’s a lot of them holding each other accountable. And you’re leading, not managing, which is way more fun. You’re encouraging, you’re strengthening. You’re not standing over top of them telling them what to do.”

That kind of flexibility extends to virtually every aspect of DeLeon and Stang — including the reasoning for their latest location, in Frederick. The partners realized many of their employees lived in that area and were spending significant portions of their days commuting.

That new office – in addition to being convenient – also builds on all the aspects of an accounting firm no one would expect. Having those elements attracts better candidates, which is just another example of the firm’s future-forward philosophy.

“We want to be the first to the race with the Millennials, because they’re going to be the future of the firm, and they want cool space, they want flexibility,” Brad said. “We’re here to accept and challenge the Millennial workforce, and want them part of our team.”

You can listen to our full podcast here 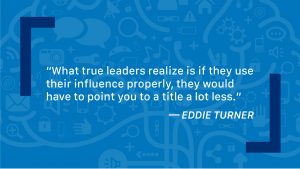 “We think the secret sauce is that it should be facilitated,” said Eddie Turner, who joined me for the Change Your Mindset podcast. “Facilitated collaboration is what accelerates performance and drives impact.”

Eddie is a C-suite network advisor, international certified coach, a professional speaker, and President of the Association for Talent Development’s Houston chapter. In short, he knows facilitated collaboration better than most.

Facilitation can be the way through a myriad of issues: process mapping, conflict resolution, and strategy planning, to name a few.

The key to that facilitation? Having a dialogue — not a monologue — and asking engaging questions that allow leaders to come to their own conclusions, without being told what to think. Through that facilitated approach, where they’re being asked probing questions, leaders learn more. And now — with sweeping changes affecting nearly every industry in the world — is not the time to forget the importance of continued education.

“Some people never take a class after leaving a university. I know some people who don’t even pick up a book after leaving university,” Turner said. “So if we’re not continuing to educate ourselves, we’re leaving ourselves vulnerable to the disruption that technology will introduce.”

The best way to think about the constantly-changing landscape that requires constant education? Stay ready so you don’t have to get ready.

To stay ready — no matter what changing industry you’re a part of — you could stand to benefit from facilitated collaboration.

Whether you’re lower on the totem pole and need to stay up on the latest trends, or you’re a leader looking to inspire the masses, you have to be facilitating. Because “collaboration” runs the risk of being just a word without facilitation.

And without facilitation? You risk being left behind.

“We need to be continuous learners,” Turner said, “scanning the horizon looking to see where we can improve ourselves as individuals and staying ahead of the curve.”

To listen to the entire interview with Eddie Turner, you can click this link and download it from my website or you can download the episode on iTunes, Spotify, Stitcher, or Google Play. Just search Change Your Mindset with Peter Margaritis. It is January 5th, 2017 and have you already broken your New Year’s Resolution?  According to some studies, which have not been verified, about 50% of people have already broken at least one of their New Year’s resolutions by today.  When the calendar turns January 31st, about 85% of people have broken all.  Then why do we even create them if we are not going to be successful?  Why do we fail?

Aristotle once said, “We are what we repeatedly do.  Excellence then, is not an act, it is a habit.” In other words, we have not created the habit or we have not practiced to a point where we don’t have to think about it. It just comes naturally.  And when we fail, it is easier to get back on the proverbial wagon than giving up.

I have come up with a system that will help you build ANY habit and it is called the Yes And Challenge.  By using Yes And in your response to others you will become more productive, inspiring, motivating and connect better with those around you.

Go to my website www.petermargaritis.com and scroll down to the YES AND Challenge call to action box and click to sign up.  Every Monday, you will receive an email challenge designed to help you find creative ways to build new habits and improv the way you communicate.  Here is an example of an email challenge you will receive – “Adaptability is easier when listening to understand rather than listening to respond.  What better way to adapt to changing situations than taking the time to listen to what is really being said.”

Give it a try because you have nothing to lose and everything to gain. Years ago, a friend and I started a business called The Group Mind. We had some large cards printed with the words “Yes, and” on the outside (you can read more about that improv principle here). When you opened the card, it read:

“There are gems in every idea. Embrace and build. Treat every idea as though it has the potential to change the world and at some point, one will!”

I’ve previously addressed the notion that we need to “dump SALY” which is essentially abandoning the “same as last year” approach to business. With busy season in the not-so-distant future, perhaps it’s time to cultivate creativity in not only yourself, but your team in order to make things more efficient, productive and happier.

How? It all starts with ideas. Ideas indeed have the potential to shake the world. If you want to change things, you have to flex that creative muscle.

But how do you encourage this idea-sharing environment? Especially in a traditionally left-brained profession – how can you make sure the right brain is present? Improv. You need to employ the improv principles I’ve presented until it becomes second nature. The elements of improvisation—trust, support, respect, listen, focus, and adapt, along with “yes, and…”—when working together, will go far to enhance your ability to adapt quickly and appropriately. It’s a matter of attitude, and each day we need to strive to get those pieces in place.

When you choose to embrace and practice improv, it’ll dramatically affect your workplace environment and it will have a contagious result. However, it will take constant practice on your part – to the point where you can’t stop doing it. You will believe in yourself and your abilities, and that confidence will propel you to even greater excellence and encourage others to share and feel comfortable in contributing.

When it comes to understanding and applying improvisation, people sometimes tell me, “this is too simple, Pete.” And the thing is, I agree; it is simple. It’s supposed to be simple. The most powerful concepts are not all that difficult to grasp. You can use improvisation and “yes, and…” to encourage creativity and ideas that will go on to change the world. You can use it to inspire and include others in your workplace, your marriage and family, and all your relationships—it works at all levels.

Allow those in your life – especially your team members this busy season – to benefit from the practiced principles of improv. Consider a team exercise. Sign-up to receive my weekly challenge designed to help you and your team find creative ways to build new habits and improve the way you communicate. Let them enjoy the freedom of sharing ideas that will take your business and relationships to new heights! I’ll be the first one to tell you improv isn’t all about comedy and making people laugh. However, my introduction to improv was a result of finding and using comedy as a coping mechanism to deal with a number of challenges life threw my way.

I’ve never truly fit in. Being adopted, I tended to feel that way. I was a Greek American living in Lexington, Kentucky, in the 1960s and 1970s. We celebrate Easter at a different time than other people each year – that’s kind of hard for a kid to explain to his friends. When I was in a fraternity in college, I told the others that I wouldn’t be moving back into the house the next year because I was going to work on my grades. They told me they would kick me out if I did that, and they did. I was always different.

What I realized though was the power of comedy and laughter. I found I was able to make people laugh, and that brought me great satisfaction. I don’t think this is an uncommon feeling amongst comedians – they somehow feel “different” than everyone else in some way and humor is a good way to bridge the gap. Even though I would become an accountant, I eventually realized that I could perhaps marry the two worlds. As a result, I have shared the power improvisation can have in all aspects of life, including business.

A major lesson that I got from improv is that it’s okay to make mistakes, learn from them, be myself and just keep moving forward. I have written a number of blogs that speak to specific improv techniques, but ultimately integrating improvisation into our lives fosters the following:

How can you go wrong with those attributes? Learn more about how improv principles can improve your career by tuning into my new podcast series Improv is No Joke!, available on iTunes and my website.