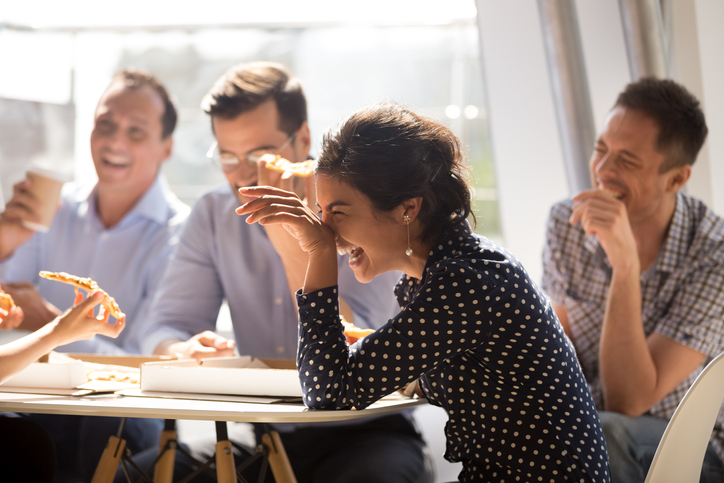 “By injecting humor and levity into our work lives, we give ourselves an opportunity for human connection.” Peter Margaritis

According to some recent research, adding more laughter to the workplace helps improve the organization’s culture. Humor allows people to cope with stress and build relationships and is associated with intelligence and creativity.

Workplace humor is about a positive, light-hearted, open attitude and a playful mindset. One of the best ways to create a competitive advantage is to create a culture that embraces laughter. By injecting humor and levity into our work lives, we give ourselves an opportunity for human connection —something so easily lost in today’s pandemic weary and technology-driven world.

Humor has not been seen as a top leadership characteristic but rather a secondary leadership behavior. However, there is more research evidence that humor should be one of the top leadership behaviors. Incorporating humor into your company culture isn’t that easy, but well worth it. It is essential to understand your own company culture when it comes to humor in the workplace and bring it in a way that fits and enhances the culture and the people.

There is a delicate balance between creating a culture that embraces humor and developing leadership that learns how to use humor to strengthen the organization, and it’s well worth the effort.

It is my experience that conference calls are…well…useless. Waste of time, waste of energy. This video captures my feelings perfectly, and probably yours, too.  Laughed so hard I fell out of my chair!

Earlier this year I spent three days in Las Vegas participating in the National Speakers Association Laugh Lab conference entitled “How to be funnier…even if you’re not that funny now.”

Now I consider myself a pretty funny guy, but I’m always thinking of ways to incorporate more humor in my presentations. Why? Think about the presentations you’ve attended where you actually enjoyed yourself. Where you laughed a little – or a lot. You remember them, don’t you? More importantly, you probably remember at least one important thing the speaker was trying to communicate with you.

Humor does that. It connects you with your audience and your audience with you. That connection helps your audience absorb – and more often retain – the information you’re trying to communicate. There was an Ohio University journalism professor named Mel Helitzer who said if we can open students’ mouths with laughter this will allow us to spoon in knowledge. I’ve embraced that philosophy as an instructor and speaker, and I can tell you – Mel was right.

At the Laugh Lab, I met people from all around the United States including an Emmy award-winning comedy writer, stand-up comedians, motivational speakers, dentists, life coaches, authors, a PhD in psychology, engineers, and even accountants like me. We all had different backgrounds and experiences and different reasons for attending the conference, but at the core, we were all there for one reason – to learn more about humor and how it can make us better at what we do.

As I was traveling back to Columbus, I thought of four things that I could do to enhance my upcoming accounting and auditing update presentation based on what I learned at the Laugh Lab.

Try one or two – or all four – of these techniques in your next presentation and get your audience laughing! There’s no better way to help them stay focused, alert and engaged. And better yet – they’ll remember what you’re trying to communicate with them. So go ahead. Make them laugh and spoon in that knowledge.