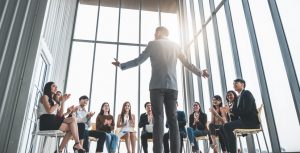 When it came to presentations, Jennie Scheel’s initial strategy wasn’t exactly foolproof. As CFO of Five Nines Technology Group, presenting was a core part of her job description. But …

“My strategy was to get up there, put all my beautiful spreadsheets up there with lots of numbers, talk as fast as I could, smile, then sit down and hope there was no question,” Jennie said.

It won’t shock you to learn that Jennie’s audience didn’t always share her appreciation for a beautiful spreadsheet. And since they weren’t interested in the method of presentation, they often didn’t understand the information being laid out for them, either.

That’s when Jennie switched up her presentations. Instead of only speaking in her language, she presented in a language that everyone could understand. To break up the boring financial numbers, Jennie instead broke down all the numbers as part of a dollar.

For example, instead of explaining that company benefits were 6% of the company’s expenses (which doesn’t really mean anything without context), Jennie illustrated the information to reflect the fact that six cents out of every dollar are spent on benefits, like health insurance or a 401(k) match.

And instead of throwing a meaningless alphabet soup of letters up on the screen (COGS), Jennie instead illustrated what Cost of Goods Sold actually meant.

“I have to remember and try to say, okay, so here’s our bucket of revenue, here is a bucket which is hopefully not nearly as full of expenses, so that when you mix them together, that’s the number that makes up our net income,” she said. “So they can kind of see how those flow together and in proportion to each other.”

When it comes to accounting (or any niche, really), it’s important to remember that every niche has its own language. Engineers use words others don’t understand. Accountants speak in numbers and percentages and words like “accrual.” So when these niches cross paths (like when Jennie, a CFO, is presenting to her IT outsource company full of engineers), it’s crucial to use language that everyone understands.

“The second that I say the word accrual, I think that they automatically go straight back to their phones or lose any idea of what I was trying to say,” Jennie said.

Language doesn’t always have to be solely words. It can be body language, too: That’s why Jennie started wearing blue jeans to her presentations, instead of nice suits. Most engineers at her company dressed in jeans and polos most days — so dressing to match your audience can make it easier for them to listen to you.

And, of course, language can be simple pictures, as well. That was the quickest thing that Jennie — lover of spreadsheets — learned.

“The pictures are doing an excellent job of telling the story, instead of my spreadsheet,” she admitted. “Obviously I love all of my spreadsheets and all of the data, but those are not what will relate, and people will not be able to understand. So what I have learned through training and by actually utilizing it is that the pictures really resonate with people.”

The point of any presentations — whether they’re filled with spreadsheets, numbers, photos, or videos — is for the audience to understand the content.

So when it comes to presenting, tailoring to your specific audience can make a huge difference in them understanding your content (versus zoning out, and not retaining anything you say).

To listen to the full Change Your Mindset interview with Jennie, click here