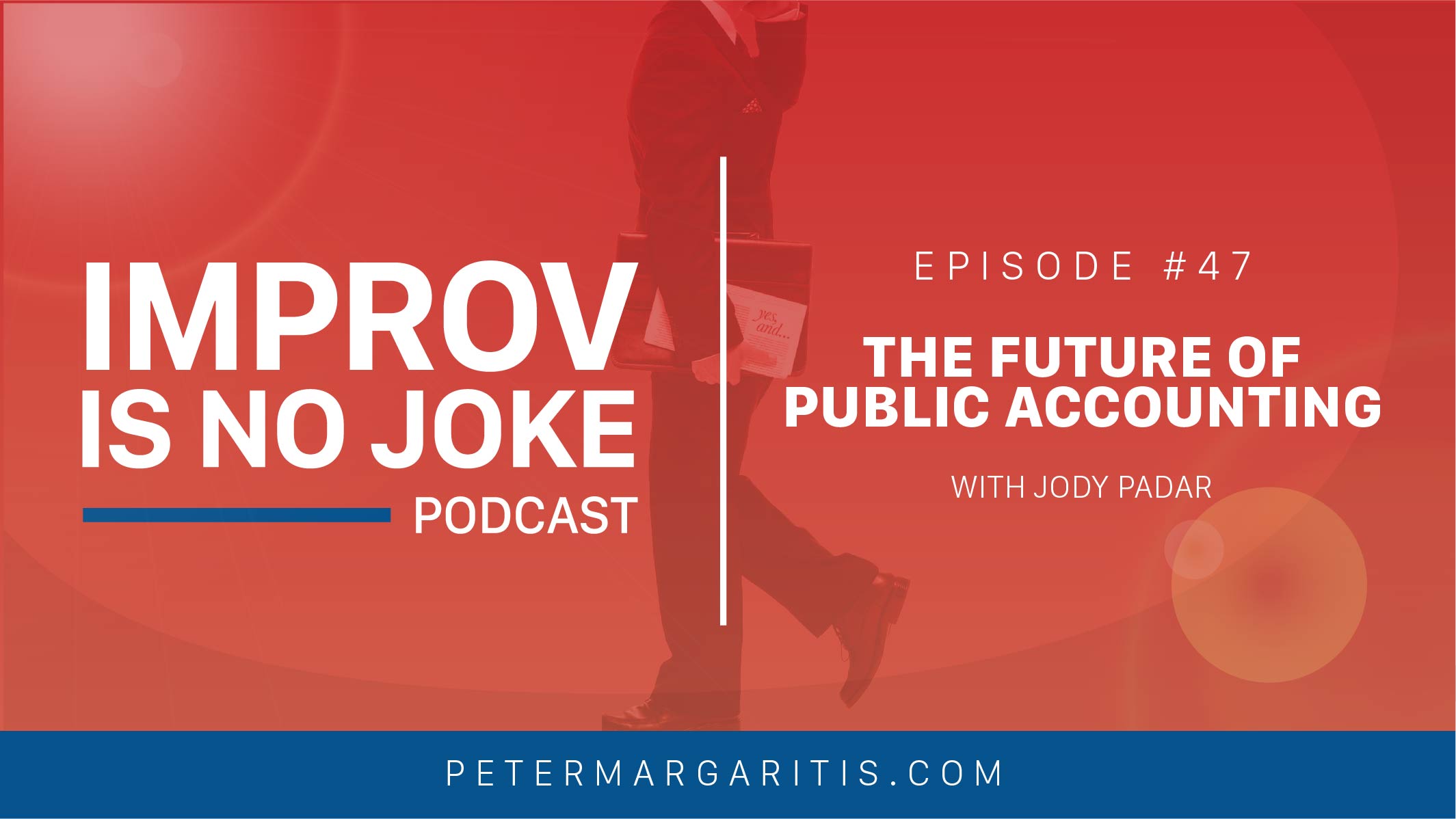 Jody Padar is a radical CPA, the CEO & Principal of New Vision CPA Group, and the author of The Radical CPA: New Rules for the Future-Ready Firm. Later this year, she will release The Radical CPA 2.0. She’s been one of Accounting Today’s top 100 influencers in the accounting profession for 6 years, and in 2015 she was named a Managing Partner Elite.

Jody represents the next generation of accounting professionals; the vanguard of the new movement of “digital CPAs.” She is trying to educate the profession on its natural evolution into the digital age… before they go extinct.

Jody believes in embracing the cloud, social media, bots, and other highly advanced technologies and practices. She wants to alter how CPAs think about firm culture and serving their clients.

So far, embracing technology and looking to the future is going very well for Jody. The average CPA firm grows 4% annually. Her firm, New Vision CPA Group, grew 25% last year – organically, or without acquiring anyone. On top of that, she expects to grow 25% again this year.

Jody’s success isn’t surprising. She’s moving into the future with consumers, because that’s what CPAs have to do if they don’t want their firms to go the way of Blockbuster and Blackberry.

She really doesn’t understand why more CPAs don’t let the technology do the grunt work. CPAs are spending their time doing work that’s not value added, instead of letting technology do it.

Do you want to join Jody on the front lines of accounting?

In the meantime, you can learn a lot more by picking up a copy of The Radical CPA or by signing up for her newsletter (where she gives away most of the advice from her books away, for free!).

Jody: Yeah, and what she does is she goes into my bank account every day and she tells me the balance, and then she saves money for me based on an algorithm in my checking account. So based on the balance she may move six dollars or twenty dollars or whatever, and she just moves it to another account for savings. So it’s kind of like this unknown way of forced savings, but if you text her back and you ask her something she tells you how much is there. Or like she just texted me like a little bit ago, well maybe a couple weeks ago, and she goes “make it rain savings like a boss. You now have over two hundred and fifty dollars in your digit account. Spread the love.” And then they have like this crazy GIF there with like money flying around.

Jody: You may laugh at that or say well like what is she doing, but if my customer comes to me and says hey I downloaded this bot on my phone and it’s telling me to do savings account and asked me that question, and I don’t know that it’s out there, how do I look as a financial advisor? I look like a dummy.

Jody: So like how do you put these things in your firm so that everybody’s aware of them so that it just makes your collective firm know what’s going on in the world?

Peter: So I have known that bots are now existing in accounting, so I could be sitting here I could open up my my general ledger quick books–

Jody: But CPAs aren’t on social.

Jody: Right. But just think about that. CPAs aren’t on social. And I know that’s a lie and I know I’m really over-exaggerating it because I have a lot of friends who are CPAs on facebook, but think about that. If you can do accounting via facebook now… I mean it’s just crazy. But how are you not even aware of it, and how does your firm look if you don’t know what’s going on?

Peter: right right right. So do you envision a version of Alexa or Google home, a device on our desk, that will be able to answer financial questions that we have based on logarithms that are in there? Or I’ll be able to predict and I got a client and and here we’re just going to upload all this information and then you’re going to spit out some reports and you’re gonna give me some advice and you’re going to tell me some things, and now I need to go converse with the client.

Jody: Yes I think that within five years time bots will be mainstream. Now I may be wrong. I’ve been wrong before. But I think I think it’s going to happen sooner than CPAs realize, because I mean think about nobody knew about Alexa but now everybody has her.

Peter: I haven’t brought her into my house. I’m not allowed because you know I have ADHD and I can log on to Amazon and my wife goes ‘they’re here again? Would you quit buying stuff.’ With Alexa there I’m gonna be bankrupt. But yeah Alexa kind of snuck up on us. Google home kind of snuck up.

Jody: and I think the big thing to think about is is consumer-driven. So it’s not that CPAs are thinking oh I want to use a bot to do my work faster. What’s happening is customers come into your office and they tell you about the bot they’re using, and if you don’t understand what it’s doing how are you going to be relevant to that client anymore?

Peter: Exactly. And as you were saying I’m going Jody I think this is a wonderful opportunity for you to invent a bot.

Jody: [laughs] No. You know what, I’ll let the the technologist invent the bot. I just like to play with them.

Peter: Also we should call it the Padar. But yeah, the way technology is moving… the firm that we grew up in – okay let me rephrase that. The firm that I grew up in many years ago. You’re right. It might not be there in five to ten years.

Jody: But here’s the thing: like there’s an opportunity to change now, but partners have to get on board. They have to realize that it’s time and that they can do it. I mean I don’t want to be like this big debbie downer and say oh my god like you’re gonna be obsolete. I want you to say oh my goodness I need to change. Let me get started so that I do remain relevant. I think there’s such an opportunity here, and I think CPAs can be relevant. I think they’re smart people. But they have to get started, and I think that’s the big thing. The biggest problem is not even doing the work; it’s acknowledging that they need to do the work. So if you can acknowledge it and just start with one foot in front of the other, before you know it your firm will flip because it has to. It’s like you just start moving and then somehow you’re at the end of the marathon. Like you didn’t even realize, or like the training that you’ve done through the beginning of the marathon just gets easier and easier and easier. So it just becomes a muscle. Your innovation muscle just gets developed, and then all this new stuff being thrown at you. It’s not change management. Its innovation.

Jody: Well of course. That would be awesome, but but actually you can sign up for my newsletter and get it all for free. I know you’re CPAs. Come on!

Peter: Before we forget, where can they find your newsletter?

Jody: They can sign up… well, on social media, but oh wait… they might not be on social.

Peter: I’m gonna name this episode ‘accountants aren’t on social media and then just put a smiley face texture because we know.

Jody: that is not true. If you go to like theradicalCPA.com or if you go to CPA trend lines you’ll find out like all kinds of information about my newsletter. And again you could buy my book, but you don’t have to. You can just sign up for my newsletter.

Peter: Buy her book too. I’ve been an author. Buy her book too. Get the radical CPA, read it between now and the start of May, and then pick up 2.0 which would be probably coming out would you say maybe summer fall?

Peter: Hopefully July okay. It sounds like building a house.

Jody: Well and I think the thing is, too, that it just takes a small step, right? As long as you get moving, the big thing is just to start. It’s not to flip your firm overnight, but to just get started. Because I think the other thing is, if you get started your younger team members will see that and they’ll help you and they’ll see the energy and they’ll want to help you continue to move forward. I think the biggest problem is the the mid-level managers don’t see the partners wanting to change, and so they’re revolting and they’re frustrated and they’re leaving and all this stuff. But I think all they need is a sign that you’re open to change so that they can like be part of it.

Peter: Yeah because if you begin to change and we get moving in that direction and you employ your younger staff, and I use the term younger in a very broad way, you’re gonna get excitement from them. They’ll be more than happy to walk through a brick wall for you in this transition to the firm of the future.

Peter: Totally. So I don’t take up too much more of your time. So we got 2.0 coming out. We’ve got your book. They can read all about you in accounting today, CPA trendlines. Get your newsletter. You can find Jody. I was gonna I was gonna read her bio… I thought I was busy, and then I read her bio and I went nah, i’ma let her do it. But she’s got a lot of great advice. This is not something she just started 10 minutes ago in her garage. As she said, this came about I would say seven-plus years ago when you said there’s got to be a better way. Boom, and just put the mindset behind it. I don’t have to wish you luck because you’ve got all the luck in the world moving forward. I look forward to 2.0 coming out. I love watching your career just explode and keep exploding. You’re you’re fighting the great fight for the profession. I may not practice in this profession, but I am a CPA and I do love it as well and my big crusade is to convince CPAs that communication skills are important, if not more important, than the technical skills. So we both have our our battles, we will keep fighting them, and thank you so very much for taking time out to be on this podcast today.

Jody: Thank you for having me Peter

Peter: Remember, you can subscribe to my podcast on itunes, stitcher, and google play. If you’d like to purchase a personalized autographed copy of my book Improv is no Joke: Using Improvisation to Create Positive Results in Leadership and Life, for $14.99 with free shipping, please go to my website, PeterMargaritis.com, and you’ll see the graphic on the homepage to purchase my book. Please allow 14 days for shipping. You can also follow me on social media. You can find me on Facebook, Twitter, LinkedIn or Instagram.