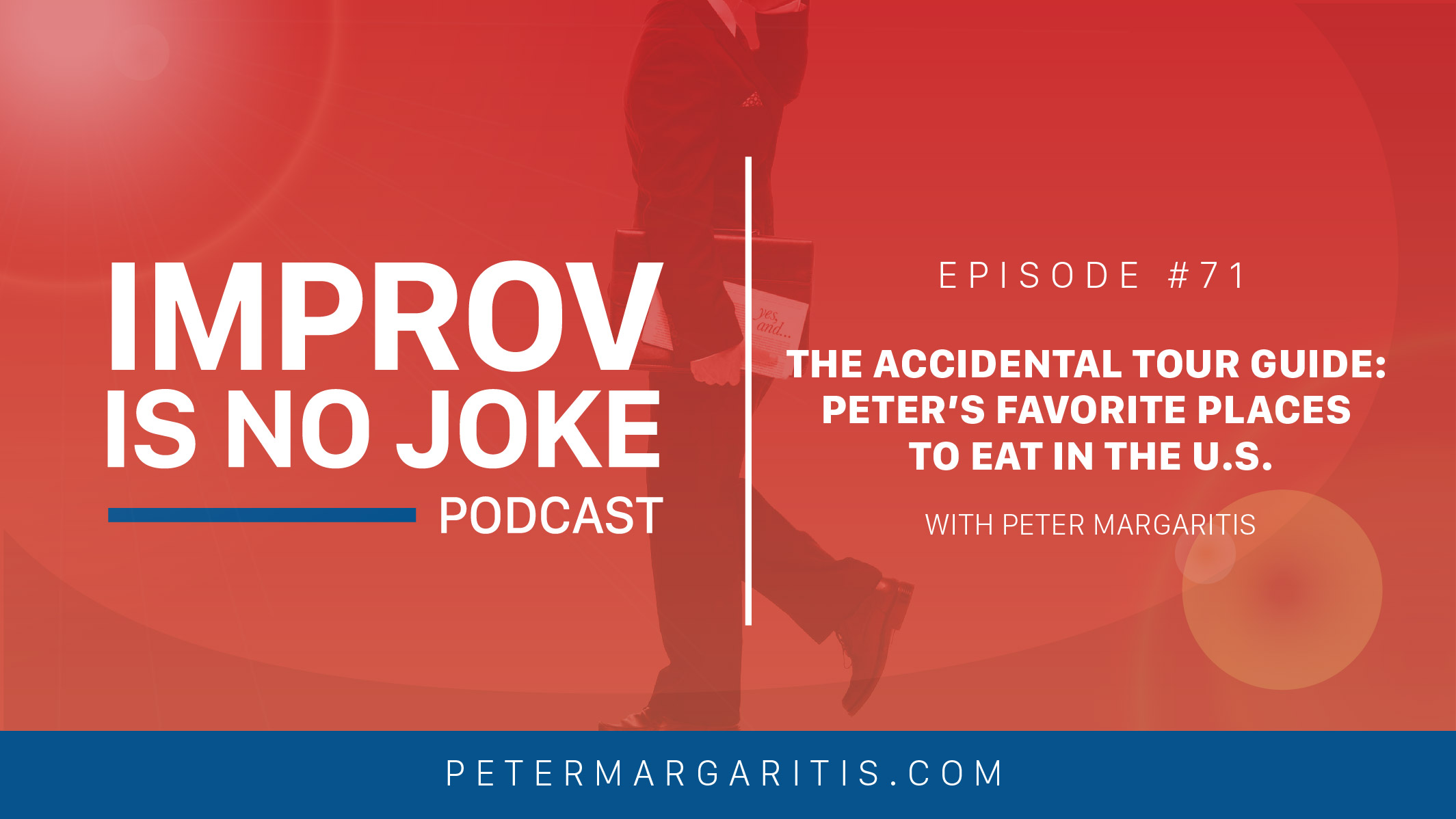 We’re doing something a little different today: Peter shares his favorite places to eat all over the country. He was inspired by former guest Clarke Price, who keeps a record of every restaurant he visits and often suggests new places for Peter to try.

Peter: [00:00:00] The triple delight which is a soy-wrapped salmon avocado roll topped with diced yellowtail. Norwegian salmon. Tuna with ponzu. Siracha. Spicy mayo garnish with avocado. Oh my goodness. This was sushi heaven.

Peter: [00:00:26] Welcome to Improv is no Joke podcast, where it’s all about becoming a more effective communicator by embracing the principles of improvisation. I’m your host Peter Margaritis, the self-proclaimed chief edutainment officer of my business, the Accidental Accountant. My goal is to provide you with thought provoking interviews with business leaders so you can become an effective improviser, which will lead to building stronger relationships with clients, customers, colleagues, and even your family. So let’s start to show.

Peter: [00:29:50] Now before I close this episode I would like to take a moment to talk about the first five episodes of this podcast are now qualified for CPE self-study credit in the NASBA category of personal development. Those interviews are with Clarke Price, former CEO of the Ohio society of CPAs. Mike Sciortino, author of Gratitude Marketing. Tom Hood… Well you’ve been introduced to him and you will be introduced to him again. Ed Mendlowitz, who’s a partner at Withum, Smith, and Brown. And Karl Ahlrichs, who’s H.R. professional at Gregory and Appel. These episodes are located on the MACPA-BLI self-study Web site and they are mobile friendly. Create an account and purchase an episode. You can listen to them on your daily commute or while working out, or even at your desk! When you’re finished, take the review and final exam on your mobile device or your computer. It’s that easy. While all Improv is no Joke podcasts are available on my web site, only those purchased to the MACPA-BLI self-study Website are eligible for CPE self-study credit. This is not nano-learning – this is self-study learning. You can get detailed instructions by visiting my website at PeterMargaritis.com and clicking on the graphic: Listen, Learn, and Earn improvs is no joke podcasts on my home page. I hope you enjoy this exciting and flexible new way of receiving CPE credit. Remember, you can subscribe to my podcast on iTunes, Stitcher, and Google Play. If you’d like to purchase an autographed copy of my book Improv is no Joke: Using Improvisation to Create Positive Results in Leadership and Life, for $14.99 with free shipping, please go to my website, PeterMargaritis.com, and you’ll see the graphic on the homepage to purchase my book. Please allow 14 days for shipping. You can also follow me on social media. You can find me on Facebook, Twitter, LinkedIn or Instagram. In episode 72, I interviewed Bill Sheridan, who’s the chief communications officer at the Maryland Association of CPAs and author of the white paper, Human Work in the Age of Machines: Five Steps for Building a Future Ready Finance Team. Thank you again for listening and I greatly appreciate it if you’d leave a review on iTunes. It helps to show with greater visibility. And always remember to use the principles of improvisation to help you better connect and communicate with those in your organization.